Now you have an app. So, what's next?

For many people, especially the ones who just published their first app, the excitement of building and seeing the application icon shining at Apple’s or any other store is enough to satisfy their feelings of accomplishment. Honestly, having published some apps in the past myself, it is really pretty cool. However, the “emotion” drains day after day, when the sales do not come, the ratings are not the expected ones and/or the reviews never show up.

The purpose of this posting is to provide a few tips on how to build a simple marketing plan for increase your app chances of survival, and keep you excited for the next ones.

1) There’s work before you launch, and it is not coding…

Let’s be very clear here: there are lots of great apps like yours fighting for the same attention you want. What make them different is the amount of time their developers spent with marketing!

Things you should do:

2) When the app is ready but not published yet…

For many, due the long development time, the moment the last line was written (manually or via Kwik) and the console is not showing any errors, it is the moment to send it to the stores. Wait!

Instead of “freeing” yourself from your app, hold your breath and try a few things first:

3) The day the app is published/approved…

Here’s the area I think many people lose chances. Having you app listed in a store is not the end but just a slow beginning. The moment your app is approved and listed, at least another dozen of apps are enabled at the same time. Meaning your fame (being listed in the New section of the stores) will take less than a few seconds. After that, it is gone! You are going to be competing with top apps.

So, what to do to increase your chances:

Naturally the “buzz” of the launch decreases after few days of the launch (new apps appear, other main “news” are published, etc). Below, a few things you should consider to keep you in people’s mind:

What about having a free version?

I have mixed feelings about apps with paid and free/lite options. I prefer to spend my time working on marketing activities that will improve sales than creating and managing two different source codes, for example creating special deals (even free) on specific days, partnering with other sources/etc. Also, (again, personal opinion) it is easier to someone to buy in “impulse” a well designed, with detailed info, application, than install a free/trial one, use it, then return to the store and buy the paid version – too many steps and, chances are the “well design screenshots” may not be that cool when live, in the paid version.

What I am trying to say is, with the price range of .99 till 2.99, a wrong purchase will not kill my (and most people) finances. However, I can tell you pretty much all apps (storybooks mostly) I downloaded for free (trial or lite version) never received a penny from me. Why? They were not that cool as I thought or I simply didn’t have the time at that moment to stop what I was doing to return to the store to purchase it (the impulsive purchase moment was lost because my attention went to other places).

I would prefer to install a free promotional app (as I mentioned before) that drives my attention to a paid app, than to test a trial one and buy later.

No matter what, my app never took-off. What to do?

Unfortunately you are not alone but, take a moment and think about how many new things you learned in the process? Don’t you thing you are much more prepared for new ones? Or, in the worse case scenario, you may have found this business is not for you.

Seriously, Angry Birds was not the first app developed by Rovio, neither Doodle Jump was the first one by Lima Sky. Also, the Robert Nay’s effect is not for everyone (nobody is interested in someone above 14 creating apps :)).

Spend time figuring out what did not work. Your narration audio was not professionally recorded (believe me this is the most important thing after the graphics)? Budget correctly for that in the new app. Your graphics/illustrations were not top? Maybe your drawing skills are not that good yet. Be honest with yourself. Few people in the world are good in illustration, audio, animation, coding, marketing, etc all together.

Use the acquired knowledge and move on to your next idea. Also, take advantage of your previous app (only if it was a good one) and link it to the new one. Want to know a good example? Check the story of Fire Maple Games and see how they are using their first app, The Secret of Grisly Manor as a driver to the new one The Lost City.

I am really looking forward your comments here. Thanks for your time!

Main spar connected to the skins. 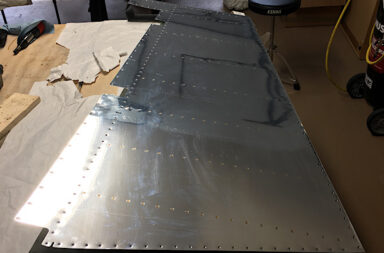 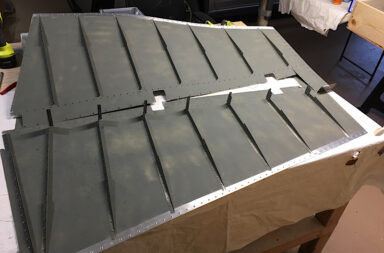 Skins are ready to meet each other.