Kwik was the flagship product of my previous company, called Kwiksher (which was acquired by a Japanese investor in 2014). It is a plugin that allows Photoshop users to create interactive apps, including education, storybooks and games,  for iOS and Android, with just a click of a button – no code required.

While learning to code for the iPad, I needed a tool to auto code design elements positions/content for the programming language I was using. With this need, many questions like these arose:

– How to create storybooks for the iPad being an illustrator/designer with no code skills?
– How to help thousands of book illustrators and millions of educators to create content without the support of developers?

Creating a way to, using your tool of preference, add app-related features, click PUBLISH and have an app auto-coded, would allow more people to create apps.

A Photoshop plugin for app creation, as it is/was the preferred tool for creative people.

Being an extension for Adobe tools, there are several limitations from the SDK, including lack of better ways to input data. One of the biggest challenges was to design windows for the capture of lots of data, like the Multiplier Replacement below: 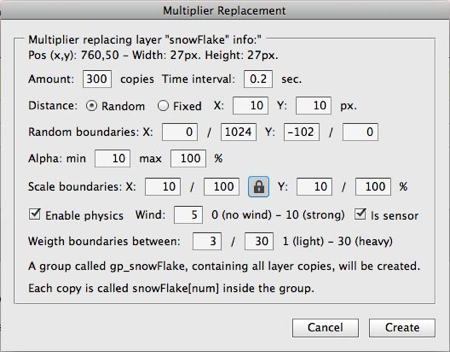 ABOUT THE DESIGN PROCESS

Even before starting the development of Kwik, I had several interviews with storybook authors, Corona (the SDK used for building the code for iOS and Android) users, and illustrators across the world. A feature suggestion forum was created, as well as I had a beta-testing process with power users, plus several webinars, events and conferences participation.

While “learning from users”, I noticed that most of them did not have any experiences promoting their apps, reason why I designed the “APP SHOWCASE” promotional space directly into the plugins interface – when clicking the banner, users would be redirected to the app page:

More than 7,000 users downloaded the product and have created more than 1,000 apps, including several ones named on New and Noteworthy by Apple.