Back to the future (part 1): Thinking outside the box

Cleaning up my papers, I found several printed designs I did for customers in the 90’s, when the web was “gray”. I’ve decided to revisited them in a three part series. Sorry if images are too small (at that time, bandwidth was a big issue).

ONCE UPON A TIME, THE WEB WAS GRAY…

The year is 1995 and the worldwide web (yes, we would call the Internet as this) is full of pages like the one above. Internet Service Providers (ISP) proliferate like a plague (after all, AOL was not available in several countries, including Brazil, where I used to live at that time), as well as the “html pages” they hosted. ISPs where the way to end users get access to the web (later they where replaced by the large service companies like AT&T, Comcast, etc) and black text, with a few images over a gray background, was the default “template” for anyone creating web pages (the concept of websites came after).

As a younger designer, with experiences on building interfaces for mainframe applications (I used to work in a large bank) and multimedia cd-roms, I was intrigued with the possibilities to add advanced imagery (3d, Photoshoped images, animation, etc), the same way I used to have in my cd-rom projects, in a very limited environment, similar to the ones I have worked in the past with mainframe computers.

Clearly I had to leave my comfort zone (again) and learn “how to code in html” (I was pretty savvy with Macromedia’s Director Lingo language at that time) .

First hint: as a designer, you are in a constant learning environment. New technologies are available all the time, providing room for experiments. So, get as much education as possible and try!

MIXING PREVIOUS EXPERIENCES WITH NEW ONES…

In order to differentiate myself from the hundreds of “designers” (in fact, customers cousins and acquaintances, that could use a computer), and consequently charge the right amounts for new jobs, I decided to try a new, yet in beta, tool from Adobe called Adobe PageMill – this was the first visual tool for design a web page.

The tool speed up my html learning process but, more important than that, helped me to focus my time on the design part (instead of handling dozens of html tags). As you can see in the WebArchives, my first customer project was way different than the competitors at that time: This project opened doors later for several new customers (samples below), culminating with the development of the first Shockwave game in the country (1996) and being awarded by iBest (most important award in the country) in 2001 in both popular and official jury for the website of a famous artist. 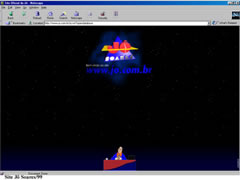 Last hint of the day: Old skills can differentiate yourself, even in unexpected situations. In my case, knowing Director (no “web designer” was interested in a “multimedia tool”) allowed me to develop the game for Techs Provider, which was recognized as “Macromedia Shockwave of the day” award, which generated media, which brought my small studio attention to other customers. Much later (more on that in a future post), the logic behind multimedia design helped me to create my Masters thesis, and creating Kwik. Again, the new may be an opportunity, not simply a challenge.