PPG Finder is a navigation app, available for Android and iOS devices, designed specifically for paramotor, and ultralight pilots willing to get “regular” dashboard information for their flights (showing map, altitude, speed, compass, riding time and traveled distance), PLUS the ability to check, in real time, where other pilots” are around them. The “live” view shows friends around on the map, highlighting their altitude, speed, and distance from you. Also, the app records your flights in the cloud, meaning you will access them, even on different devices.

In places with lots of paramotor/paragliding/trike pilots flying at the same time, it is almost impossible to track who is flying to each direction, who is flying close and how some pilots are performing better than others.

In traditional aviation, aircrafts have a technology called ADS-B, which is, according FAA, an environmentally friendly technology that enhances safety and efficiency, and directly benefits pilots, controllers, airports, airlines, and the public. With ADS-B, pilots for the first time see what controllers see: displays showing other aircraft in the sky.

Although this technology is not applicable for paragliding (and other super light forms of flying) due its cost, size/weight, and flying differences, we believe there is an opportunity to offer something similar, using the smartphones, a device commonly used by pilots.

Being a paramotor pilot myself, I have always looked for ways to decrease flying risks, but also enjoying my experiences while flying with friends. As pilots, we like to use apps to help us to track our flight data (while flying or after). While there are several apps focusing on helping pilots with dashboards and maps, none of them was designed to help people flying in groups. Also, the large majority (if not all) of them are clearly “designed” by developers: 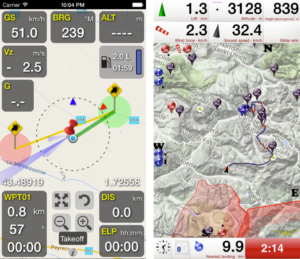 Create a complete, yet simple, app that provides “real time” information about pilots flying around, respecting the features from other apps, already used by the pilots.

ABOUT THE DESIGN PROCESS – version 2

With PPG Finder 1.x being launched in June of 2017, it was natural to re-design it six months later, as the result of customer feedback and my own experience flying almost every weekend with the application.

Several users suggested another app that family and friends could check them while flying. According to them, people would like to track where they were, especially in the case of an emergency. After thinking a lot (and even started another app just for that), I decided to bring this tracking feature directly into PPG Finder, which I called “Ground View“. Basically, it allows any user (even not pilots) to track who is flying anywhere in the world (no distance limitations here). 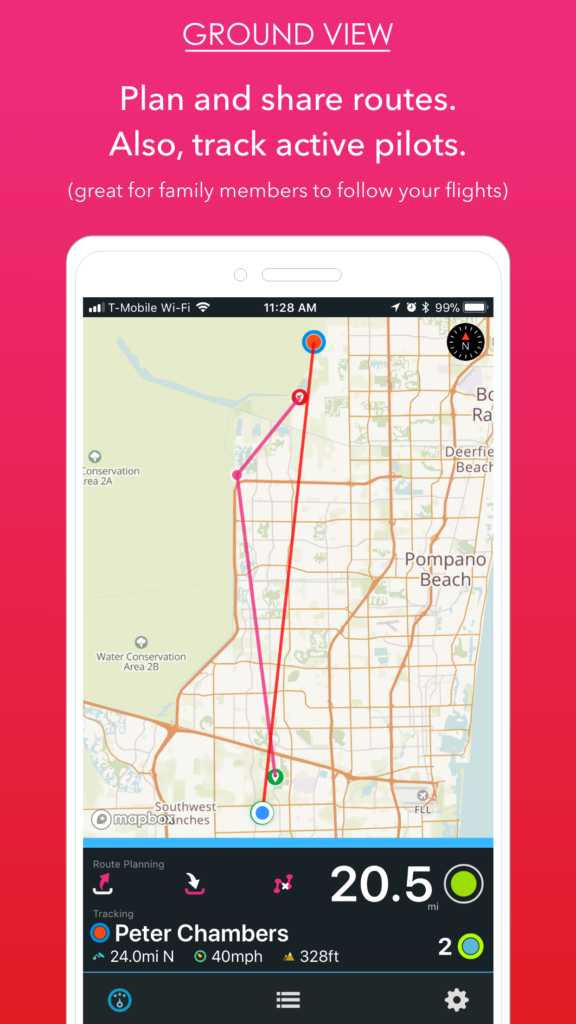 In the example above, the user is tracking pilot Peter Chambers, which is flying 24mi North of the user, at 40 miles per hour, with an altitude of 328ft. This info is refreshed every 15 seconds.

Taking advantage of this Ground View, I’ve also made easier the process of planning and sharing routes. Just click on the map to set waypoints and discover how long is your planned route. Clicking the first button saves your route for one year and share it with active users. The second button loads it back and the third button clean up the map again.

Notice also the start button got a “smaller” version, as its importance is much lower with the auto-start flying mode (PPG Finder automatically detects the user is flying depending on its speed and altitude).

Another request was to increase the map portion of the interface. This was achieved in both Ground and Flight Views, gathering all dashboard elements to the bottom part of the screen:

I decided to update the Flight Log View as well, automatically capturing the location name and weather conditions. Also, users are now able to rating their flights and even write some optional info about them. 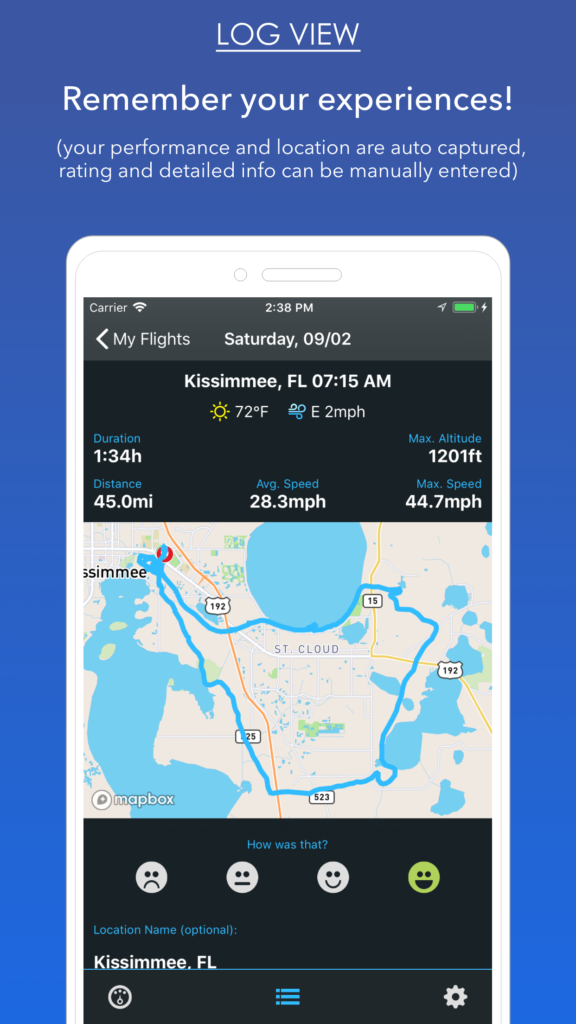 Lastly, being also a pilot, I created a new button on the main interface that tells the pilots the local wind conditions. In the case of an emergency landing without visual wind direction clues, the user can get the current readings of a local station. 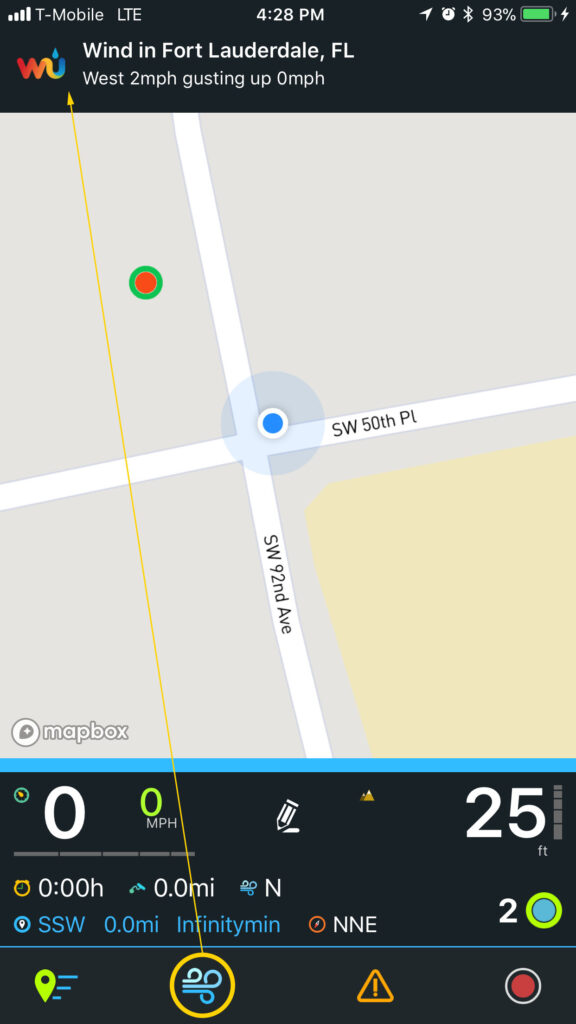 ABOUT THE DESIGN PROCESS – version 1.x

I had several constraints while designing PPG Finder, including the fact I am not a professional developer, neither I knew how to code with the selected SDK. You can learn more about the development process here. The entire process could be resumed as a fully Lean UX cycle: idea, development, test, and so on.

Before starting I interviewed several pilots (in fact they “crowdfunded” the development) about what they needed. Also, during the beta phase and since the launch, I kept the interviews, reason why the interface changed a lot from the original idea to the first version, or the final UI. 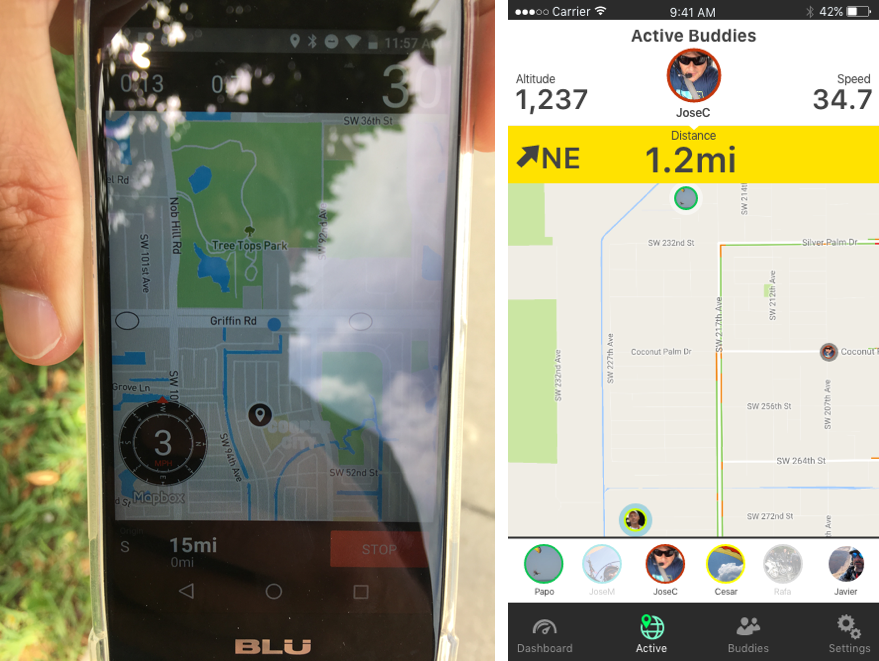 PPG Finder is already used by more than one hundred pilots (still growing) across the world. The app is available in 3 different languages and expanded from a “real time” dashboard about flights to a full flight management system, including route planning. It has a modern design, being a user-oriented solution. 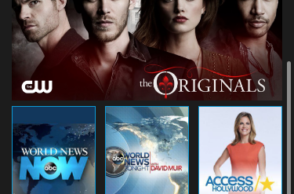 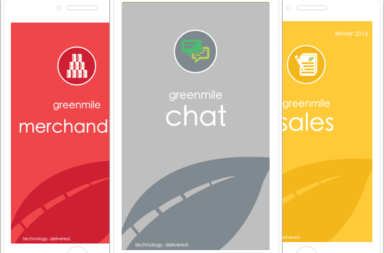 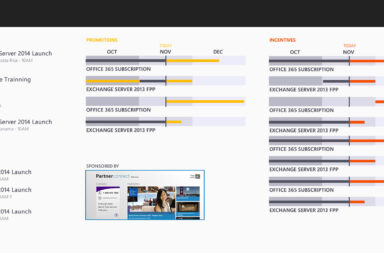